You are here: Home / What we do / CABI centres / Azolla control

Azolla is one of the UK’s most invasive water plants. CABI’s work on Azolla control - researching and testing a biocontrol agent to control the weed naturally in the UK - has led to a programme that rears and supplies weevils to customers affected by Azolla.

Here you can find out about Azolla, current control methods and how to purchase weevils.

The fairy fern or floating water fern (Azolla filiculoides) is an aquatic plant with fern-like foliage that originates in the Americas. It was first recorded in the UK in the 19th century and became naturalized. It is now a popular garden aquatic.

Why is it a problem?

Azolla filiculoides has a remarkable ability to multiply. Fronds grow rapidly and elongate until fragments break off to form new plants. Mats that form on the water's surface can be 30cm thick and can double in size in hot weather.

The mats block out light, kill rich and diverse aquatic flora and reduce available oxygen which can lead to the death of fish and invertebrates, impede flood defences and water-based recreation and block irrigation pumps.

Azolla has escaped from gardens into the wider environment, becoming a problem on ponds, lakes, rivers and canals throughout the UK. Azolla was one of five aquatic weeds banned from sale in the UK in 2014.

Fragmentation of the fronds makes mechanical control virtually impossible. This is worsened by the annual production of millions of tiny spores which are released in autumn and grow into new plants the following year.

There is one herbicide that is licensed for use on water in the UK but environmentally-friendly alternatives are preferred.

Biological control has been used effectively against invasive species for over 100 years. It is a natural way of controlling invasives using living organisms, such as insects or pathogens.

For Azolla, research has shown the tiny 2mm long North American weevil (Stenopelmus rufinasus) to be one of the weed's main natural enemies. In South Africa, it has proven to be an outstanding example of biocontrol, providing ongoing weed control.

Why are weevils the best solution for controlling Azolla in the UK?

The weevil can only feed on Azolla, it will not harm other plants. When 'en masse,' the weevils consume large quantities of the weed and they can be targeted at very specific sites where the weed is considered a problem.

Following extensive research, CABI studies have shown that Azolla infestations can be brought under complete control using only the weevil in a matter of weeks and without the need for chemicals or further control measures.

The weevil is mass-reared in the UK and shipped throughout the summer months to customers affected by Azolla. 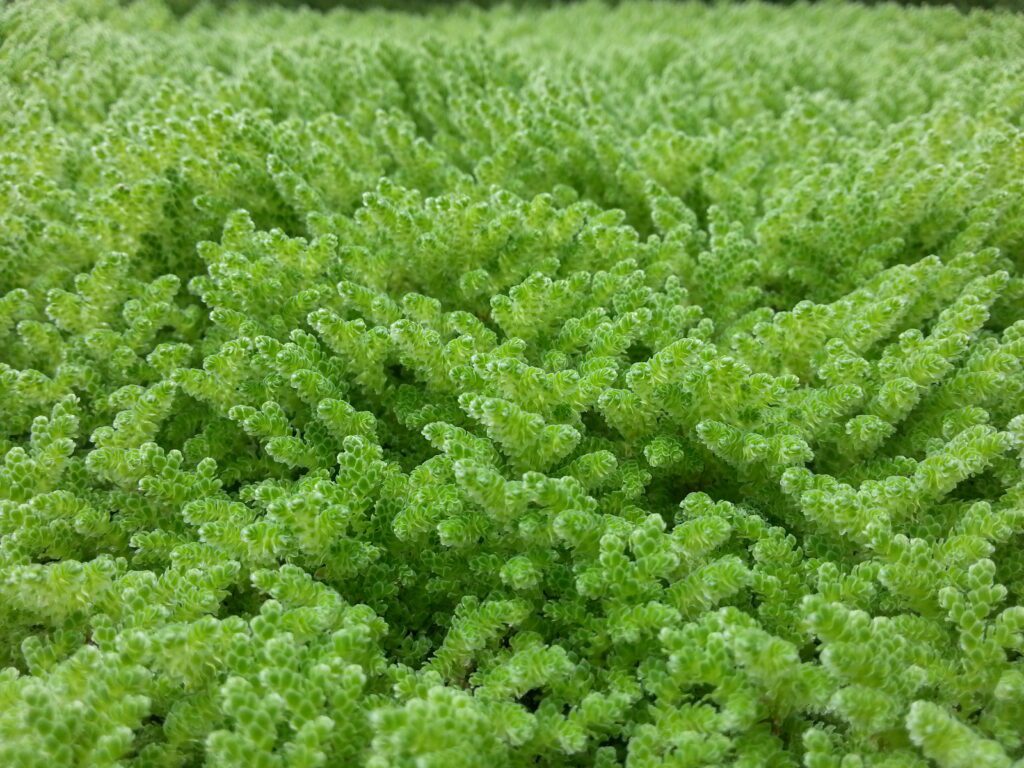 Azolla infested pond - before the weevil

Azolla pond - after the weevil

How to purchase weevils

To order packs of weevils or to discuss control options for Azolla infestations, please contact us.

Weevils are available in standard, medium and large packs.

For postage costs and queries about controlling larger areas, please contact us. 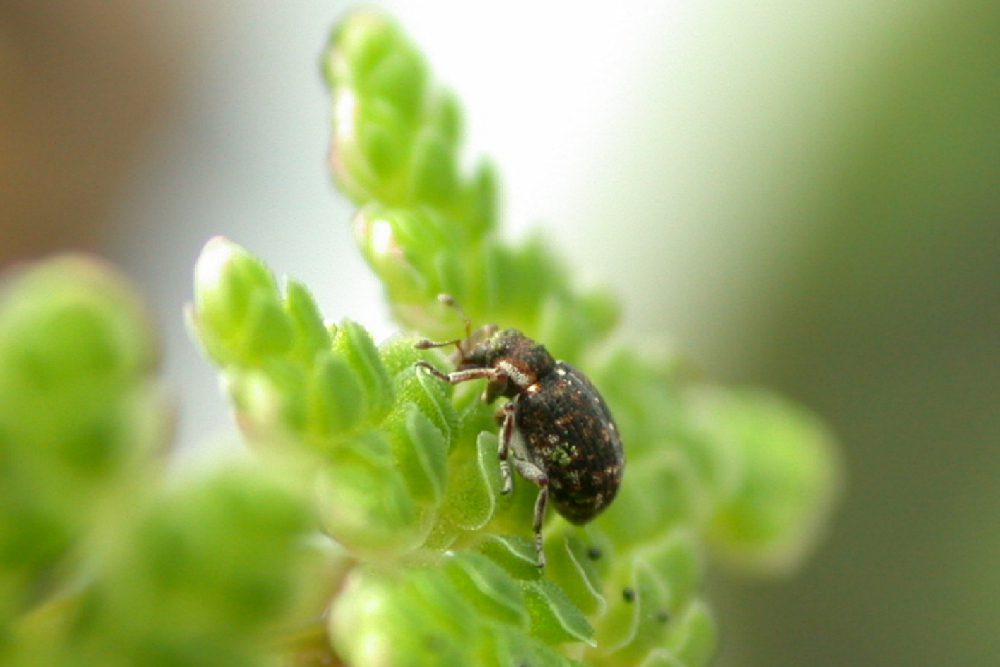 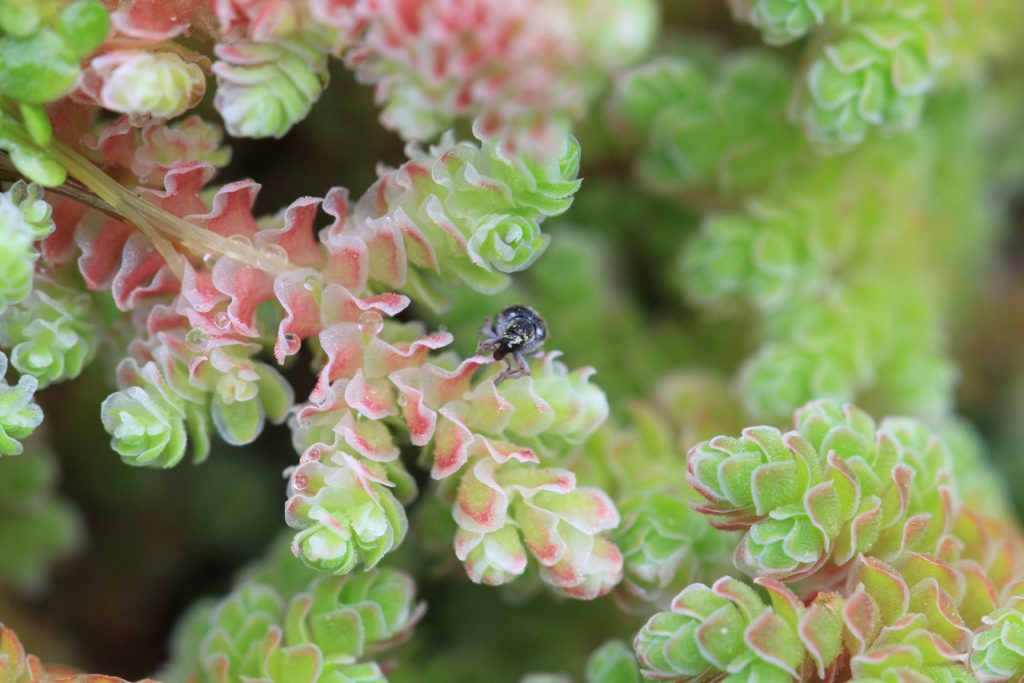 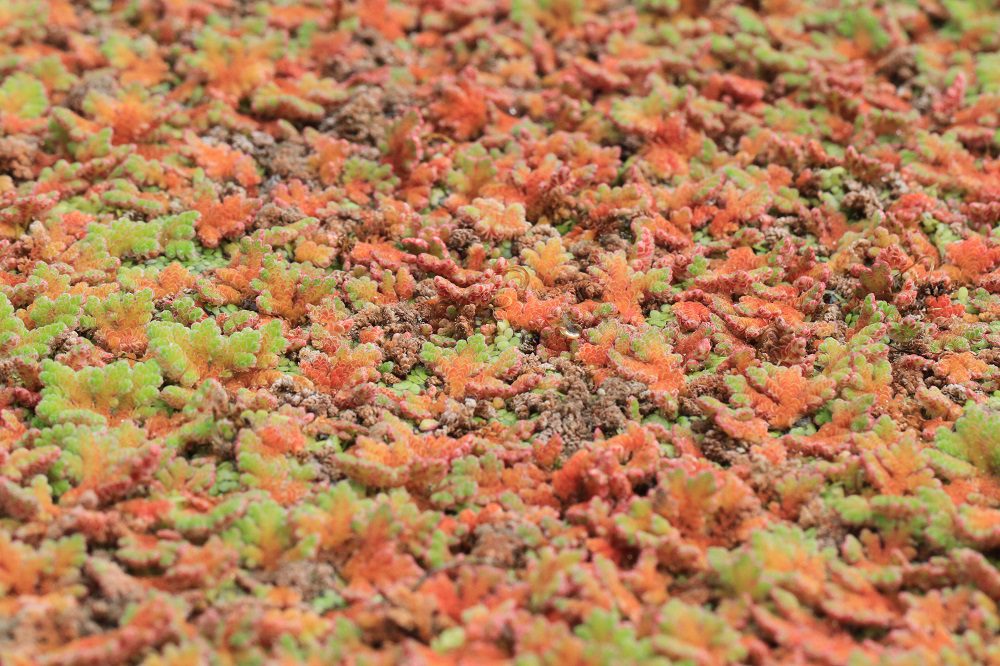 Corin leads the Azolla control project. He mass-rears the weevil, Stenopelmus rufinasus, and conducts ongoing research to improve our understanding of the weevil and its effectiveness as the natural control agent against Azolla in the UK.

The plant is fairly easy to identify, each frond consists of a main stem growing at the surface of the water which has alternate leaves and adventitious roots at regular intervals along the stem. Secondary stems develop at the axil of certain leaves. Azolla fronds are triangular or polygonal in shape, and float on the water surface individually or in mats.

How does Azolla reproduce? Expand

Azolla reproduces both vegetatively (pieces of the fronds break off and form new plants) and by the production of spores. The spores function like the seeds of terrestrial plants and can over winter at the bottom of the pond. When conditions are right these spores will float to the surface again, where they initiate sexual reproduction and so produce a new generation of plants.

How can one tiny weevil control the weed? Expand

Individually each tiny weevil will not have much effect, however, 'en mass,' the weevils can be devastating. Weevils are capable of rapid reproduction and within a matter of weeks, weevil populations can reach several million. All mobile life-stages of the weevil (adult and larvae) feed voraciously on the plant which makes this insect a force to be reckoned with.

How can it be that they only attack one plant? Expand

Many insects are monophagous, meaning they will only attack one species of plant. This is not as surprising as it seems since many endangered insects are under threat because the host plant or its habitat has become rare. These organisms have spent hundreds and thousands of years evolving to overcome the defences of their food plant and during this time they have been forced to become restricted to this plant to complete their lifecycle.

What happens to the weevils once all the weed has been eaten? Expand

Larvae of the weevil cling on to the dying Azolla and will drown when it sinks. The adults can only feed on Azolla species, therefore once their food source has become exhausted they will disperse in the search of more Azolla. The weevils can fly, although there has been little research into the distances that they can travel. The weevils will migrate into other neighbouring pools as their population expands. The speed at which the weevils control the Azolla infestation is related to the size of the initial release (number of adults and larvae) and the prevailing weather conditions. Under ideal conditions, control can be rapid.

What happens to the weevils in the winter? Expand

The weevils are native to the west coast of North America. Insufficient research has been conducted in the UK to say exactly what happens to the weevils during the winter. Our best guess is that the majority die, however, a few adults find sheltered spots where they go into diapause (a period of biological dormancy with decreased metabolism). These weevils sit out the winter and become active the following spring when the Azolla starts to regrow. Regrowth is either from spores (seeds) shed during the summer, or vegetatively from plants that survived the winter. If the winter is mild and your ponds are sheltered then some weevils may survive to the following year.

There have been many notable successes in biological weed control not least the example of the weevil Cyrtobagous salviniae against the floating water weed Salvinia in Sri Lanka. The plant was introduced into the country during the second world war to prevent the enemy aircraft from identifying waterways and it did the job so well that almost all water bodies in the country were affected. The weevil was released in 1986 and within four years it had destroyed around 80% of weed infestations. Since its discovery Cyrtobagous has been a successful control agent against this weed in more than 10 tropical countries around the world.

When is the best time to apply the weevils? Expand

The weevils can be released throughout the growing season of Azolla. The best time to release is early in the season before the Azolla has become out of hand. Azolla soon takes advantage of the increased day-length and warmth of late spring/ early summer and can grow extremely rapidly doubling its area every 4-5 days. Usually, one release of the weevils is sufficient to exert control, however, if you have a large infestation or require more rapid control more releases may be necessary.

One of the UK’s most invasive plants, the fairy fern or floating water fern causes problems for anglers and water managers. It forms thick mats on the water’s surface which can double in size in a few days, blocking out light and killing aquatic flora and fish. Fragmentation of the fronds makes control by mechanical means virtually impossible. This project involves researching and testing the use of a 2mm-long North American weevil (Stenopelmus rufinasus) as an agent to control the weed naturally.

Himalayan balsam has rapidly become one of the UK’s most invasive weed species. A lack of natural enemies allows it to successfully compete with native plants for space, light, nutrients and pollinators, reducing biodiversity and contributing to erosion. Traditional control methods are inadequate. This project involves identifying an insect or plant pathogen that exclusively attacks Himalayan balsam, which can be released into the UK to control the plant while leaving indigenous species intact.

Controlling floating pennywort in a safe and sustainable way

Floating pennywort is an invasive aquatic plant that can over-run water bodies in the UK, and is threatening habitats, native plants, fish and insects. Also a problem across much of Europe, this plant has rapid growth and can regenerate from small fragments. Management is mainly limited to mechanical clearance which is expensive and often ineffective. Through comprehensive host range testing, this project aims to identify the safest and most effective biocontrol agent to keep the plant in check.