Executive Council members noted the positive results CABI has achieved in 2014, focusing on the organisations commitment to its mission and 2020 vision, addressing the needs of Member Countries and securing financial growth.

Dr Nicholls reviewed CABIs work in International Development and Publishing. Strategic highlights of 2014 included the organisations appointment as the implementation partner in an Australian-African biosecurity project funded by ACIAR, which builds capacity through change champions in Eastern and Southern Africa. CABI also integrated Publishing with IT creating a Knowledge Business. The organisation collaborated with the FAO and US National Agriculture Library (NAL) on common indexing approaches and was also selected to host the secretariat of Global Open Data on Agriculture and Nutrition (GODAN).

Members approved a number of new proposals, including endorsements on:

– Approval of new Members to CABI

– The proposal on the Review Conference

– Approval of new Non-Executive Directors for the CABI Board

Talking about CABI in 2015, Dr Nicholls said, It will be an important year. Were excited about the prospects for our Knowledge Business, formed from the integration of Publishing and IT. Plantwise remains very high on our agenda and CABI will continue to support our Members as they implement the programme in-country. We look forward to continuing our strong partnerships in plant biosecurity and plant health. 2015 will also see us make a big push to measure and reduce the impact of invasive species on food security and livelihoods in developing countries.

Mr Sharbendu Banerjee, CABIs Global Director for Mobile, talked about how CABI aims to scale up CABIs mobile agro-advisory service, Direct 2 Farm, to reach 500,000 farmers, as well as scale out mobile services into areas like nutrition, and commodities and value chains.

Speaking on behalf of the Chinese Ministry of Agriculture, Mr Ma Minggeng, First Secretary of the Chinese Embassy, said: We are delighted to see good results have been achieved by CABI. China will continue to work in close partnership with the organisation. We hope that Chinas significant and increased financial contributions to CABI, in the form of Member Country contributions and contribution to the CABI Development Fund, can be used for facilitating more south-south co-operation between China and CABIs other Member Countries in Africa, Southeast Asia and the Caribbean, particularly through the China-CABI Joint Laboratory for Biosafety.

Zambian representative, Mrs Ikayi Mushinge, Counsellor (Economic) of the High Commission for the Republic of Zambia, applauded CABIs plan to open a Southern Africa Centre in Zambia, in order to facilitate the delivery of more development projects. These projects will help improve the livelihood of farmers and food security in the region. She gave assurance that Zambia will be a good host to CABI. 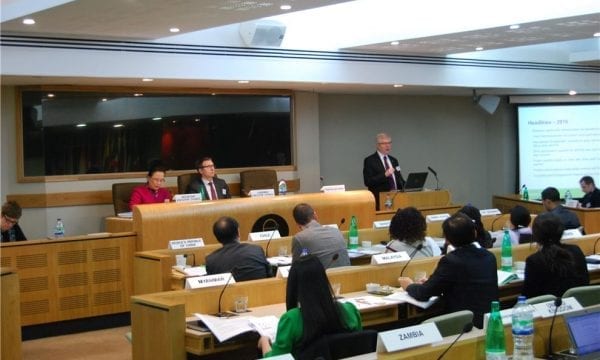