22 May 2017 – This week, on 22-27 May, CABI will display some of the UKs most invasive alien weeds at the Royal Horticultural Society (RHS) Chelsea Flower Show as part of its Nature vs Invader exhibit, looking at natural solutions to invasive plant problems.

As part of the educational Discovery Zone, CABIs display will include invasive alien weeds – plants that have been moved from their native habitat to a new one, with no natural enemies like diseases and insects to keep them in check, enabling them to spread and cause problems.

Invasive non-native species are estimated to cost the British economy £1.7 billion a year. Plants are particularly troublesome and, once out of control, they can damage delicate ecosystems and even property. The exhibit demonstrates the plants impact on the environment and infrastructure, including Japanese knotweed on property prices, buddleia on the railway and Himalayan balsam on riversides.

Alongside the invasive weeds, CABI will demonstrate biological control in action – a sustainable alternative method for controlling invasive species. This approach uses natural enemies from the native range of the invasive species, which are rigorously tested to ensure they pose no threat to the new ecosystem and represent a long-term and effective management option.

Live displays will feature sap-sucking psyllids feeding on Japanese knotweed and weevils eating the invasive alien water weed, Azolla (Azolla filiculoides ). Visitors will also be able to use a microscope with live screen displays to learn more about CABIs research.

The Chelsea Flower Show is a fantastic opportunity to show the public how we can apply science to control some of the most damaging invasive weeds. Were grateful to the RHS for inviting us to exhibit. – Dr Dick Shaw, UK Country Director and Regional Coordinator Invasives, CABI

While the overwhelming majority of plants brought into cultivation are not a problem, a few do escape to cause serious damage both to our natural habitats and to our economy. The RHS welcomes the opportunity provided by CABIs exhibit to raise the awareness of the nations gardeners about invasive plants and highlight the solutions currently being developed. – Dr Alistair Griffiths, Director of Science & Collections, RHS

Japanese knotweed (Fallopia japonica ) causes serious problems for homeowners, growing through and damaging foundations, walls and drains, sometimes stripping tens of thousands of pounds off a propertys value. Capable of growing one metre a month, Japanese knotweed can be partially controlled using chemicals, but still costs the economy around £165 million per year. The cost of eradication, were it to be attempted UK-wide, could be more than £1.56 billion.

Since 2003, CABI has been researching a sustainable long-term biocontrol option for this weed. A sap-sucking psyllid, Aphalara itadori – an aphid-like insect about 2mm long – was identified as a possible solution. Lab testing showed it poses no risk to native species, crops or wildlife, and approval was given for CABI to release the insect at selected sites. CABI is now focussing on getting it established and spreading in the field. There is evidence that a new approach has improved the insects ability to overwinter.

Buddleia (Buddleja davidii ) is a large woody shrub, capable of inflicting considerable disruption on the UKs railways. Native to China and Japan, buddleia was first imported to the UK in the 1880s. It can interfere with overhead power lines, make signals difficult to see, hinder safety inspections and damage brickwork. Buddleia is difficult to control using conventional methods.

CABI is investigating a biocontrol solution to target buddleia infestations along railway lines – the application of wood-rotting fungus such as Chondrostereum purpureum to a freshly cut stump of the plant. The approach should provide a more effective and environmentally friendly alternative to chemical herbicides, and is already a well-established practice in the United States.

Himalayan balsam (Impatiens glandulifera ) overwhelms riverbanks and clogs canals and lakes, forming dense thickets that compete with native plants for space, light, nutrients and pollinators. It changes the balance of sensitive habitats, threatens endangered species and increases the risk of flooding. The plant was introduced to the UK in 1839 and is now widespread. Controlling Himalayan balsam using herbicides is expensive and can damage the environment.

In 2006, CABI was asked by Defra, the Environment Agency and the Scottish Government to help control the weed by finding a natural enemy. CABI identified the rust fungus Puccinia komarovii  var. glanduliferae as the most promising biocontrol agent, and carried out research to ensure it was reliable, effective and safe. In 2014, permission was granted to release it at selected sites. In 2016-17, there was evidence of spores successfully overwintering. CABI plans to make further releases this year across the UK. 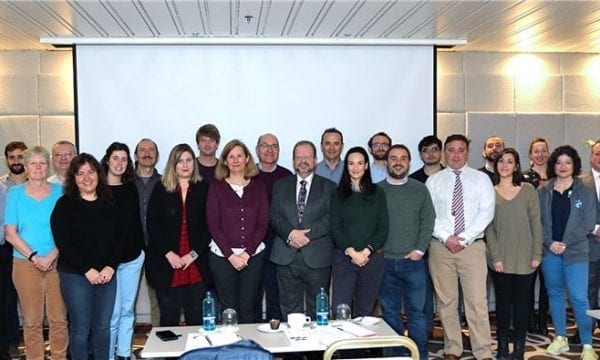 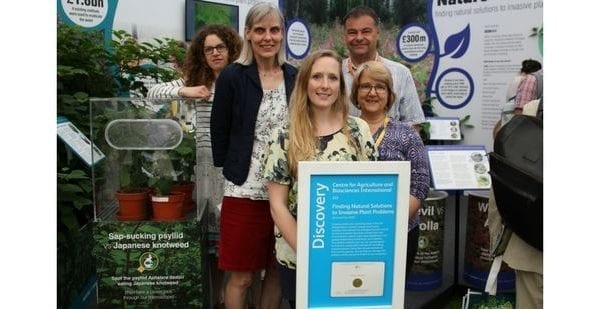