Since inception of the Plantwise programme in 2011, implementation was mainly through government partners, with limited engagement with the private sector. As such, there has been no coordinated approach to engagement with private sector partners or specific reporting requirements. This has generally been left to the CABI country teams and local context to determine how to proceed. As a result, the development of partnerships with the private sector has taken many different forms, in terms of the types of partners involved, the objectives and their contributions to the programme. In 2017, CABI developed a position statement on engagement of Plantwise with private sector focussing on how to leverage resources, partnerships and expertise in order to increase the likelihood for sustainability, scale and impact of the programme in the long term.

The purpose of this review was to understand what has been achieved through partnership with private sector actors, in terms of scaling up the programme and potential for increasing its sustainability, and how exactly those partnerships have worked. Limited data exists to assess how the private sector has contributed to programme impact.

Data was provided on private sector engagement from a total of 35 countries. The final analysis was carried out on data for 30 countries. Twenty-eight of those countries were financially supported by Plantwise programme funds while the remaining two (Brazil and Colombia) implemented Plantwise activities through alternative funding sources. Burkina Faso, Pakistan, Suriname, Tanzania and Thailand all reported having no private sector engagement.

The main private sector groups that engaged with the Plantwise programme are agro-input traders (including input manufactures, distributers and retailers), trade hubs (farmer-based organisations, associations and cooperatives), trade associations, and service providers (independent agri-advisors and large production/processing companies. Overall, 105 private sector engagements were recorded over the lifetime of the programme (2011-2020). The highest number of the engagements was reported from the Americas, with 53 contacts made with the private sector, compared to 32 and 20 for Africa and Asia, respectively. The profile of private sector organisations engaged differs by region. In Asia, the highest proportion of engagement was with the agro-input trade sector (30% of all engagements), whilst in the Americas, trade hubs were the main group (60% of the total). In Africa, the types of engagement were more diverse than other regions, with agro-input traders being the main group, representing 41% of the total. 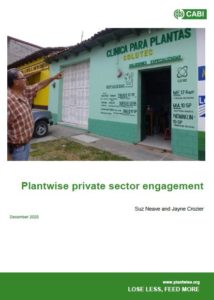