This report presents the findings of a study on the effect of Plantwise on the performance and responsiveness of the plant health system (PHS) in Nepal. In September 2017 a one-day workshop with PHS stakeholders was followed by a two week period of interviews with PHS stakeholders as well as farmers, in six different districts in the Central, Western and Mid-western Regions of Nepal. The qualitative data collected were used to explore changes in the PHS since the start of the Plantwise programme in 2011, and the underlying drivers of those changes, including the effects of Plantwise. The PHS functions are defined as: 1. Farmer advisory services; 2. Plant health information management; 3. Diagnostic services; 4. Research and technology development; 5. Input supply; and 6. Policy, regulation and control. This report is structured according to these functions.

After initial plant clinic activities in 2008, and a pilot with mobile clinics in 2011, CABI and the Plant Protection Directorate (PPD) informally agreed to incorporate the plant clinic concept into the then prevailing agricultural extension activities. In 2013, they signed a formal partnership agreement. The Government of Nepal (GoN) also formally nominated the PPD as the national body responsible for providing plant protection services, which included the implementation of Plantwise activities.

The first years focused on strengthening farmer advisory services, plant health information management, and diagnostic services, with the PPD managing these services according to Plantwise principles. The time might now be ripe to strengthen and improve the links between the other PHS functions further: research, input supply, and regulation. 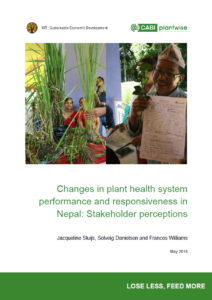