Leafy spurge (Euphorbia esula L.) is an aggressive, deep-rooted perennial of Eurasian origin. First reported in the United States (US) in 1827, by 1933 it had spread through 19 states and was considered a threat to the rangelands in the northern Great Plains. By 1997, it was estimated to infest 2 million hectares (ha) across 35 states. The invasive pest has a number of adverse economic and ecological effects. In rangeland, leafy spurge reduces livestock carrying capacity – decreasing earnings of livestock producers and increasing expenses related to control. In wildland, the weed reduces native species richness and cover, wildlife habitat productivity, and soil and water conservation benefits. Controlling the species poses a number of challenges and neither repeated chemical control nor programmes using sheep and goat grazing have sustained long-term success.

CABI’s work on leafy spurge started in 1961 with a number of surveys on biological control agents in western Europe. As a result of this work, 12 agents were screened and released in the US between 1970 and 1988. The biocontrol agents included five species of Aphthona flea beetles; of these, A. nigriscutis Foudras, and mixed populations of A. czwalinai (Weise) and A. lacertosa Rosenhauer proved to be the most successful. At the sites where flea beetles thrive and persist, leafy spurge is maintained at low densities. 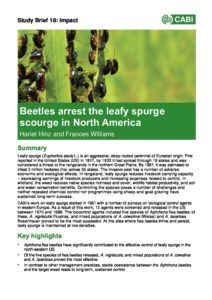