You are here: Home / CABI Publications / An assessment of the invasive species system in Bangladesh

An assessment of the invasive species system in Bangladesh

The objective of this study was to understand the current status of the invasive species system in Bangladesh, including its responsiveness. A methodology was developed for identifying areas where the system can be strengthened, as well as for establishing a baseline against which changes in the responsiveness of the system can be assessed at a later date, if required.

The current system’s strengths and weaknesses were identified through use of a revised methodology including a document review and key informant interviews with participants active within the system in Bangladesh. The process helped to clearly define and start to unpack the invasive species system in Bangladesh as it currently stands.
The study findings demonstrate that the current invasive species system in Bangladesh has some strengths, including a broad range of actors who are aware of the need for invasive species management. One example of a positive response to an invasive alien species (IAS) was the rapid establishment of a National Task Force (NTF) for Spodoptera frugiperda (fall armyworm) (FAW) when it was first detected in the country in 2018.

However, challenges to the system remain, including institutional and legislative gaps, the absence of a regulated pest list, monitoring and evaluation limitations, and a severe lack of training and resources. There is a need for support in the implementation of policies and regulations that govern the way IAS are managed, as well as improving the linkages between various actors/organizations. It is also unclear whether responses are the same across all taxonomic groups.

To strengthen the invasive species system in Bangladesh, a central coordinating body should be established that would bring together the various actors in a cross-sectoral and multi-species approach to IAS management, providing an enabling environment for action on IAS in the country. However, it is essential that the coordinating body is also supported by access to resources and capacity building. 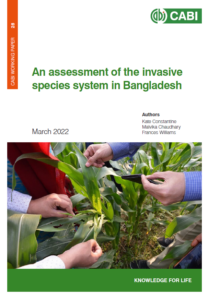 An assessment of the invasive species system in Bangladesh