You are here: Home / CABI Publications / A review of some aspects of Uganda’s crop agriculture: Challenges and opportunities for diversified sector output and food security

A review of some aspects of Uganda’s crop agriculture: Challenges and opportunities for diversified sector output and food security

Despite Uganda being largely agricultural, with the climate and soils suitable for the production of a wide range of crops, average total factor productivity growth in agriculture has been negative for the last two decades.

National agricultural output has grown at only 2% per annum over the last five years, compared to 3.3% per annum growth in Uganda’s population over the same period. As such, food insecurity and poverty remain widespread and the prevalence of national food imports has increased in the last decade. Many crops have in the past been introduced into the country, evaluated for their performance and suitability to local production zones, and many reached a stage of adoption by Uganda’s farming households. However, due to several intrinsic and extrinsic factors, including policy changes, planting of some previously highly regarded crops has either declined or been forgotten altogether. In certain instances, some other crops have remained in isolated spots on farmers’ fields or parklands lacking organized production and marketing.

We review some aspects of Uganda’s crop sector and the nature of past and present government agricultural policies, highlighting issues pertaining to some of the would-be important and yet seemingly neglected crops with the aim of bringing them into the limelight for further consideration by research and policymakers. We also make recommendations for the revitalization of reviewed crops in order to contribute to sustainable food security, diversified agriculture sector output and expansion of the national export base. Further, amidst global climatic changes, increased crop diversification and selection of crops most suited for different zones has been fronted as a rational and cost-effective method for building resilience into agricultural systems. Lessons and recommendations are scalable to other countries, with similar farming systems. 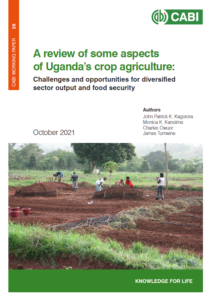 A review of some aspects of Uganda’s crop agriculture: Challenges and opportunities for diversified sector output and food security